Olaplex is a product that is added to color to prevent hair damage. Hair bonds are broken during thermal, mechanical and chemical services. Olaplex reconnects broken disulfide sulfur bonds in the hair.

Olaplex is going to make your hair stronger, healthier, and your color will last longer. If you want to lighten your hair, normally you would risk damage. But Olaplex prevents this damage. It heals, seals, and multiplies the bonds in the hair.

Will Olaplex work on my hair?

Olaplex has been tested on virtually every hair type and it works: Asian, Caucasian, African American, previously chemically processed and virgin (never before colored) all respond to Olaplex.

What about build up?

Everyone wants to know if Olaplex builds up in your hair making it difficult to color or lighten after several uses. The quick answer is that the hair just keeps getting better.

Tested by top celebrity colorists who have everything to lose, Olaplex has been tried on thousands of clients, multiple times for over a year. Not one single report of anything negative.

Tracey Cunningham, *the* hair colorist to the stars says “I’ve just used a product that gives me the superpower to do things I never thought were possible. It allows me to color more often, go lighter and double process the same day without any fear of breakage. Like, no breakage…. I’ve used it on Kim Kardashian, Jennifer Lopez, Gwyneth Paltrow and pretty much every client for the past month. I’m going through a liter of it a day! I’ve been blown away by what I’m seeing.” 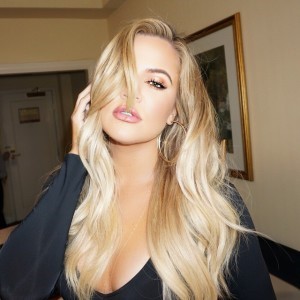 Tracey Cunningham recently transformed Khloe Kardashian’s hair and used Olaplex, allowing her hair to be lightened several shades above her naturally brunette locks to a buttery blonde. Look how healthy her hair is, despite being extremely lightened. That’s Olaplex! Photo: Instagram

And Tracey isn’t the only one. In fact, nearly every major celebrity salon in Beverly Hills and West Hollywood, including Guy Tang, Nine Zero One, Estilo, Goodform, Sally Hershberger and Chris McMillan all have their army of celebrity colorists testing this “secret” formula, which from all accounts, is no longer a secret anymore.
The Holy Grail of Haircolor

Dr. Craig Hawker, a world famous chemist from the polymer field of chemistry, with countless awards and patents to his name, who has nothing to do with hair, has created a new molecule that can link broken bonds in hair back together again. This molecule, he claims, when added into any hair color services, will absolutely prevent any breakage. It all boils down to one simple idea—a hair colorist would never have to worry about destroying a client’s hair ever again. One simple molecule. One simple ingredient. Nothing simple about its effects. Imagine no breakage ever again. Imagine never stripping hair color again. 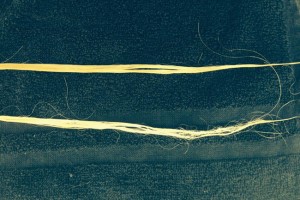 The top strand was colored with Olaplex added. The bottom strand was not.

Olaplex is free of silicone, sulfates, phthalates, DEA, aldehydes, and is never tested on animals.

The service, including the bottle of take home Hair Perfector is $50